Please welcome my guest for the Breathless Press Round Robin, Michele Stegman. She has a new release coming soon that looks intriguing! Michele is blogging about something with which I am well familiar. Chaos. Thanks for stopping by, Michele! Take it away...

Is there chaos at your house? For someone who lives on 46 acres at the end of a dead end road, it seems there is often a lot going on here. We have a lot of company, especially this time of year. And there's so much going on with end of school year dinners, parties, etc. So how does one keep up a writing schedule? With great difficulty.

With a new book, Conquest of the Heart, coming out on June 14, there is so much more to do than "just" write. Blog posts, interviews, author profiles to fill out for Breathless Press, etc. So the writing has definitely taken a back seat lately.

But it is all fun and exciting, and I'm sure things will settle down again. Even if I have to wait until that next snowfall when our driveway, a steep 400 foot stretch down the north side of the hill, is iced over and there is nowhere to go and nothing to do but write.

In the meantime, I plan to enjoy the excitement of my new release. 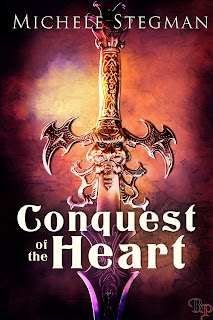 Blurb:
Her people conquered his country. How can they overcome the distrust they feel to find love?

Madeline wants a big, brash, never-defeated-in-battle, Norman knight. What she gets, by order of the king, is a wiry Saxon who once studied for the priesthood instead of warfare. But is this gentle man she has fallen in love with entangled in the rebellion now sweeping the land?

Ranulf wants to marry the girl next door. What he gets, by order of the king , is a lush, strong Norman woman who just might be a spy reporting his every move. He wants her in every way a man can possibly want a woman. But can he trust his heart to a woman who might have been sent to root out the struggle for freedom his people are engaged in?