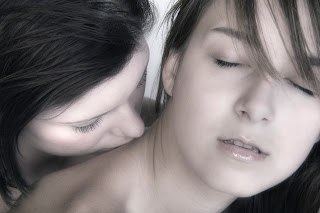 Friday night never deviated in its routine. Lisa would walk through the door of the apartment they shared with a guy in tow. While she tried not to listen, Kat couldn't help following the muffled voices as they passed her room. A soft click confirmed they were in Lisa's bedroom. They wouldn't be there for long. Tick. Tick. Tick.

Kat knew Lisa since childhood, loved her since high school. She'd been selfish asking her to move in. Suffered in silence as Lisa gave herself to one guy after another. Ten minutes became twenty and he'd grunt his release. Five minutes later, he'd be gone. Lisa would be alone. Unsatisfied.

Kat pulled on a silk robe and quietly moved toward Lisa's door. The walls betrayed their implied privacy and she heard the soft buzz along with Lisa's moans. Carefully turning the knob, Kat entered. Lisa knelt on the bed, her back to the door, one hand cupping a breast, and the other between her legs.

"Kat...ooh...yes." With each ragged breath, Kat increased the pressure until Lisa flew apart.