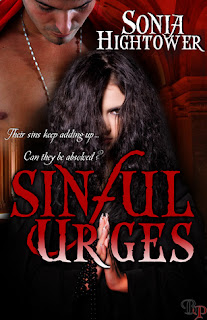 From the blurb:
Follow the confessions of Juan and Maria as they fall prey to lust at first sight. Can they stop themselves before it's too late, or will they become victims of their own sinful urges?


The man across the street causes Maria to question her own morals. When she seeks out a priest for confession, she weaves a tale of exotic kisses and stolen moments. How can Maria find sanctuary in her prayers when her body demands she finds solace in her neighbor's arms?

Sinful Urges is not what you would expect, not by a long shot. This story unfolds in an unconventional and, in my opinion, brilliant manner. The moment I started to read it, I could not put it down. The tension built much like a seduction, from the first caress to the mind-blowing climax. There was even well placed humor woven into the fabric of this book. The sexual tension crackled as they struggled not to succumb to temptation. The ending was so unexpected that I had to read it twice.

This book stayed with me and I wanted to know more about the characters, their back-story, and their motives. I found myself completely invested in them. I highly recommend this book and look forward to reading more by Ms. Hightower.

Sinful Urges is available at the following sites:
Breathless Press
All Romance
Amazon