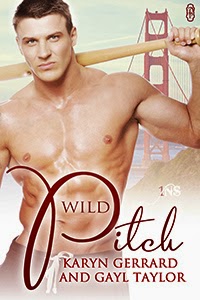 I am pleased to announce that Wild Pitch, a 1NightStand from Decadent Publishing is live! The official blurb and excerpt are below. Watch for more news on our blog tour and other fun stuff in the near future.

I am so happy this story found a new home. Writing this story with Karyn was a blast and it meant a lot to us to breathe new life into it. We whipped it into shape with a makeover and after extensive edits, is as sculpted as the cover model on the left!

If you haven't read any of the 1NS stories available at Decdent Publishing, you really should. They are fantastic.


BLURB:
When recently divorced Connie arranges a wild 1Night Stand date for her widowed best friend,  Nicole, she’s only got her friend’s happiness in mind. But one glance at the gorgeous younger man waiting at the Cougar Club convinces Connie to seize the opportunity to act out her own secret fantasy—a three-way—if Nicole is up for the challenge. After all, she doesn’t even know about the original plan.

Cut from his Double-A baseball team, all Barrett Michaels wants to do is drown his sorrows. But he’s already paid for a 1Night Stand, and with the arrangements made, he decides to go through with it in hopes it will give him one night of happiness before figuring out what to do with his future. Though he asked for an experienced older woman, he receives not one, but two beautiful women, who offer
a night of mind-blowing, sensual pleasure.

Can Madame Eve’s special brand of magic ease the pain and tear down the walls surrounding the hearts of three lonely people?

EXCERPT:
Connie Hollingsway had just found the meat filling for her hero sandwich. As far as she was concerned, the man met all the requirements she’d requested from Madame Eve, and he sat in the exact location where she’d been informed he’d be. Connie cast a quick glance toward her best friend, Nicole Sullivan, and amended her thought to, our hero sandwich. After all, she’d planned the evening for Nikki, as she could use the diversion. Truth be told, so could Connie.

Bass from inane techno music reverberated off the wood-paneled walls of the Cougar Cave. The club buzzed with excitement, pulsating with the promise of sex and the certain knowledge that one-night stands were the main item on the snack menu.

Connie’s gaze slid back to the hottie sitting alone in a booth directly across from them. The guy, in a word, exuded perfection. Ascertaining his age proved difficult under the flashing strobe lights, since he sat underneath a neon sign for Budweiser that cast a reddish glow over his stunningly gorgeous face.

She’d asked for a ruggedly handsome male under thirty, and the hunk seemed to fit the bill. His milk chocolate-colored, tousled hair had an I-just-rolled-out-of-bed appearance. Sexy. Like most young guys, he had scruffy whiskers, but her keen eye observed the delectable cleft in his well-shaped chin. Three empty beer bottles and a half-full glass sat in front of him, and he waved to the waiter for  more.

A sly smile curved her mouth. She’d been told, via e-mail from Madame Eve, that the “man under the Budweiser sign” would be game for a one-night stand with an older woman. Drunk enough, he might even be open and willing to consider Connie’s shocking, but sensual suggestion. Warming Nikki up to the idea might prove a challenge though.

Connie had been about to speak, but the words died in her throat the moment he rose, shook off his leather jacket, and hung it on the coatrack on the back of the bench seat. Her mouth dropped in shock, but she quickly recovered. Taller than she’d first imagined, he stood at least a few inches over six feet. A skin-tight black T-shirt hugged his powerful physique. Tucked into a pair of incredibly tight
blue jeans, it showcased his torso to sculpted excellence. Denim strained across rock-hard thighs, a muscular, ass and—her held breath whooshed out and ended in a moan—showed off an impressive package. Man-meat was sharpened into hardened precision, enough to rival the marble statues of Greek gods. Even better than she could’ve hoped for.

She had to get a closer look.

Sign Up for my Newsletter to receive news, teasers, contests, and more
Gayl Taylor ~ Author Newsletter
Posted by Unknown at 5:00 AM